How to Count in Italian

From Dysprosium
Jump to navigation Jump to search 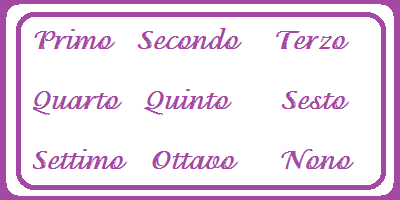 Learning Counting in Italian not only is a part of learning Italian language but also it helps to appreciate roots of many scientific and ordinary words in English. Besides, it is helpful in related French, Spanish, Portuguese, and Latin words. Here is a linguistic approach to learning them.

Learn from One to Nine

Learn from Eleven to Nineteen

Learn Multiples of Ten up to Ninety

Learn Multiples of Hundred and Thousand

Learn Small Cardinals in Between

Ordinals are easy to learn in Italian. New words are from first to nineth and also tenth.

Learn Ordinals from One to Ten