Please note: This page is the concluding part of the story of St. Julian the Hospitator.

Months passed when Julian never saw a human being. He often closed his lids and endeavoured to recall his youth;--he beheld the courtyard of a castle, with greyhounds stretched out on a terrace, an armoury filled with valets, and under a bower of vines a youth with blond curls, sitting between an old man wrapped in furs and a lady with a high cap; presently the corpses rose before him, and then he would throw himself face downward on his cot and sob:

One night he thought that some one was calling to him in his sleep. He listened intently, but could hear nothing save the roaring of the waters.

But the same voice repeated: "Julian!"

It proceeded from the opposite shore, fact which appeared extraordinary to him, considering the breadth of the river.

And the high-pitched tones sounded like the ringing of a church-bell.

Having lighted his lantern, he stepped out of his cabin. A frightful storm raged. The darkness was complete and was illuminated here and there only by the white waves leaping and tumbling.

After a moment's hesitation, he untied the rope. The water presently grew smooth and the boat glided easily to the opposite shore, where a man was waiting.

He was wrapped in a torn piece of linen; his face was like a chalk mask, and his eyes were redder than glowing coals. When Julian held up his lantern he noticed that the stranger was covered with hideous sores; but notwithstanding this, there was in his attitude something like the majesty of a king.

As soon as he stepped into the boat, it sank deep into the water, borne downward by his weight; then it rose again and Julian began to row.

With each stroke of the oars, the force of the waves raised the bow of the boat. The water, which was blacker than ink, ran furiously along the sides. It formed abysses and then mountains, over which the boat glided, then it fell into yawning depths where, buffeted by the wind, it whirled around and around.

Julian leaned far forward and, bracing himself with his feet, bent backwards so as to bring his whole strength into play. Hail-stones cut his hands, the rain ran down his back, the velocity of the wind suffocated him. He stopped rowing and let the boat drift with the tide. But realising that an important matter was at stake, a command which could not be disregarded, he picked up the oars again; and the rattling of the tholes mingled with the clamourings of the storm.

The little lantern burned in front of him. Sometimes birds fluttered past it and obscured the light. But he could distinguish the eyes of the leper who stood at the stern, as motionless as a column.

And the trip lasted a long, long time.

When they reached the hut, Julian closed the door and saw the man sit down on the stool. The species of shroud that was wrapped around him had fallen below his loins, and his shoulders and chest and lean arms were hidden under blotches of scaly pustules. Enormous wrinkles crossed his forehead. Like a skeleton, he had a hole instead of a nose, and from his bluish lips came breath which was fetid and as thick as mist.

Julian set before him what he had, a piece of pork and some crusts of coarse bread.

After he had devoured them, the table, the bowl, and the handle of the knife bore the same scales that covered his body.

Julian fetched his jug of water and when he lifted it, he smelled an aroma that dilated his nostrils and filled his heart with gladness. It was wine; what a boon! but the leper stretched out his arm and emptied the jug at one draught.

Julian ignited a bundle of ferns that lay in the middle of the hut. The leper approached the fire and, resting on his heels, began to warm himself; his whole frame shook and he was failing visibly; his eyes grew dull, his sores began to break, and in a faint voice he whispered:

Julian helped him gently to it, and even laid the sail of his boat over him to keep him warm.

The leper tossed and moaned. The corners of his mouth were drawn up over his teeth; an accelerated death-rattle shook his chest and with each one of his aspirations, his stomach touched his spine. At last, he closed his eyes.

"I feel as if ice were in my bones! Lay thyself beside me!" he commanded. Julian took off his garments; and then, as naked as on the day he was born, he got into the bed; against his thigh he could feel the skin of the leper, and it was colder than a serpent and as rough as a file.

He tried to encourage the leper, but he only whispered:

"Oh! I am about to die! Come closer to me and warm me! Not with thy hands! No! with thy whole body."

So Julian stretched himself out upon the leper, lay on him, lips to lips, chest to chest.

Then the leper clasped him close and presently his eyes shone like stars; his hair lengthened into sunbeams; the breath of his nostrils had the scent of roses; a cloud of incense rose from the hearth, and the waters began to murmur harmoniously; an abundance of bliss, a superhuman joy, filled the soul of the swooning Julian, while he who clasped him to his breast grew and grew until his head and his feet touched the opposite walls of the cabin. The roof flew up in the air, disclosing the heavens, and Julian ascended into infinity face to face with our Lord Jesus Christ, who bore him straight to heaven.

And this is the story of Saint Julian the Hospitaller, as it is given on the stained-glass window of a church in my birthplace. 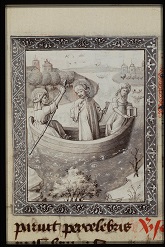 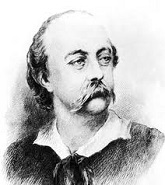 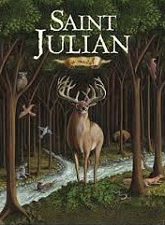 This page is maintained by Carlo DiJuliani, an Italian DJ

NO table is used in layout of this page; only Div tags.